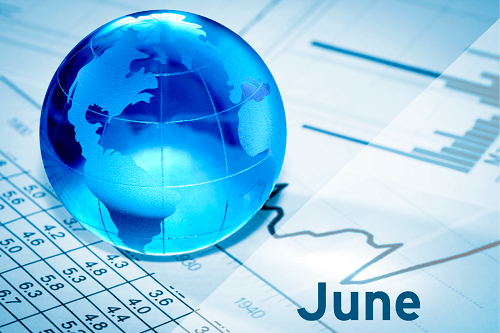 Forging ahead, the U.S. economy is attempting to regain traction with all 50 states reopened in some capacity after shelter-in-place orders were put forth in March. Economic data continues to look dreadful, and the National Bureau of Economic Research (NBER) reported this month that the U.S. officially entered a recession in February, formally ending the record 128-month expansion that began in June 2009.

The Bureau of Labor Statistics (BLS) reported in June that total nonfarm payroll employment increased by 2.5 million in May, resulting in a decrease in the unemployment rate to 13.3% from the 14.7% reported in April. However, the BLS noted what the organization has called a “misclassification error,” whereby some people were listed as employed instead of unemployed. Given this error, the actual unemployment rate would have been 3% and 5% higher in May and April, respectively. Nonetheless, the trend and trajectory still show an otherwise unexpected and welcomed improvement.

On June 10, 2020, the Fed reiterated its commitment to deploying its extraordinary policy tools in supporting the U.S. economy. Moreover, the Fed signaled that it anticipates holding interest rates steady at near-zero through 2022 and forecasts the U.S. economy to contract by 6.5% and the unemployment rate to decline to 9.3% by year-end.

Globally, COVID-19 has amassed 7.3 million infections (2.0 million in the U.S.) with over 400k deaths, and there is still no vaccine available. Policymakers must continue to take precautionary measures regarding public health in addition to balancing out the economic crisis that many countries are facing across the globe.